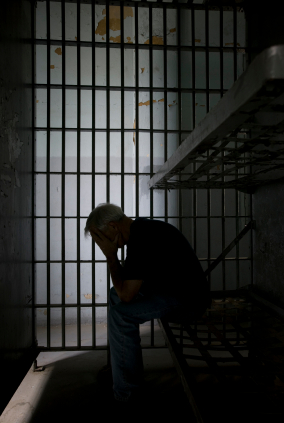 This is exactly what one of my St. Louis bankruptcy clients asked me just yesterday. He called in a panic, telling me about how some collection agency had threatened to put him in jail if he did not come current on his bill. The fear in my client’s voice was evident, as he told me word-for-word what the gentleman on the other end of the line had said.

Now it may sound awful of me, but it’s hard to suppress a smile from forming on my face whenever I have this kind of conversation. Not because of my client’s fear of being put in jail; I get that someone would be frightened if they were told ‘pay up, or go to jail!’ What makes me smile to myself is when I think about how much fun it’s going to be once I call the creditor, as my client’s attorney, and ask a few questions about their business. Because that’s where the fun begins (at least for me)!

So before I get off the phone with my client, I assure him that he need not worry about going to jail; nor should he place any amount of concern on threats posed by collection agencies, and their ridiculous threats. And most importantly, I ask the client to give me the name, number and company of the collection agency in question.

And then I sit back in my chair, and dial the number. At this point, I move into ‘lawyer mode’. My voice thickens, and I become more authoritative sounding (I’m usually a lot more laid back). Once I got the representative on the line, I told him who I was and the name of my client. The following is a rough approximation of how the conversation went:

Me: “My client is going to be filing a Chapter 7 bankruptcy, which means the debt you are calling him about is going to be discharged. But what concerns me the most is that you are evidently telling him that he will be put in jail for not paying you. Are you telling my client that you are going to put him in jail?”

Creditor: “Sir, your client still owes a balance on his credit cards.”

Me: “I understand that. And I told you that it is going to be discharged in his Chapter 7 bankruptcy. I’m asking if you told him that you were going to put him in jail. Did you tell my client this?”

Creditor: (the sound of hand being put over the receiver) “Sir, there are some debts that cannot be discharged.”

Me: “Right. But this isn’t one of them. You can’t tell my client that you are going to put him in jail. Do you have any idea what kind of trouble you are asking for by misrepresenting such nonsense? ”

Creditor: (more muffled noise, but I can hear people talking in the background) “We work for the federal government.”

Me: “You work for the government?”

Me: “The United States federal government?”

Creditor: “The Bureau of Crimes and Debts.”

Me: “Crimes and Debts?! Are you serious? Okay, what is the name of your departmental supervisor? What is your federal identification number? What is your security level?”

The point of me taking the time to write out the (hilarious) conversation I had with the (clueless) creditor, is to show the lengths to which these organizations will go to pull money out of you. They will lie, misrepresent, fabricate, and even pose as federal agents in a non-existent department of the government. The reason they continue with these (ridiculous) tactics is simple: they very often work. If you got a call from a fierce-sounding man who was threatening jail time if you don’t pay up on your debts, you might begin to worry a bit. But if he also claims that he is from the federal government and is going to come pick you up if you don’t make a payment, you might even begin to panic. Lots of times, people in this state of panic scrap together any spare change they have and send it in (even when that money was going to pay for basic needs, like food).

But they are nothing more than tactics. And more often than not, they are illegal tactics.

If you’ve had something similar happen to you, please do talk to an experienced St. Louis bankruptcy attorney today. Phone conversations and office consultations are free of charge. Not only may you benefit from a Chapter 7 of Chapter 13 bankruptcy filing, but you may also have a Fair Debt Collection Practices Act (FDCPA) claim against the creditor.